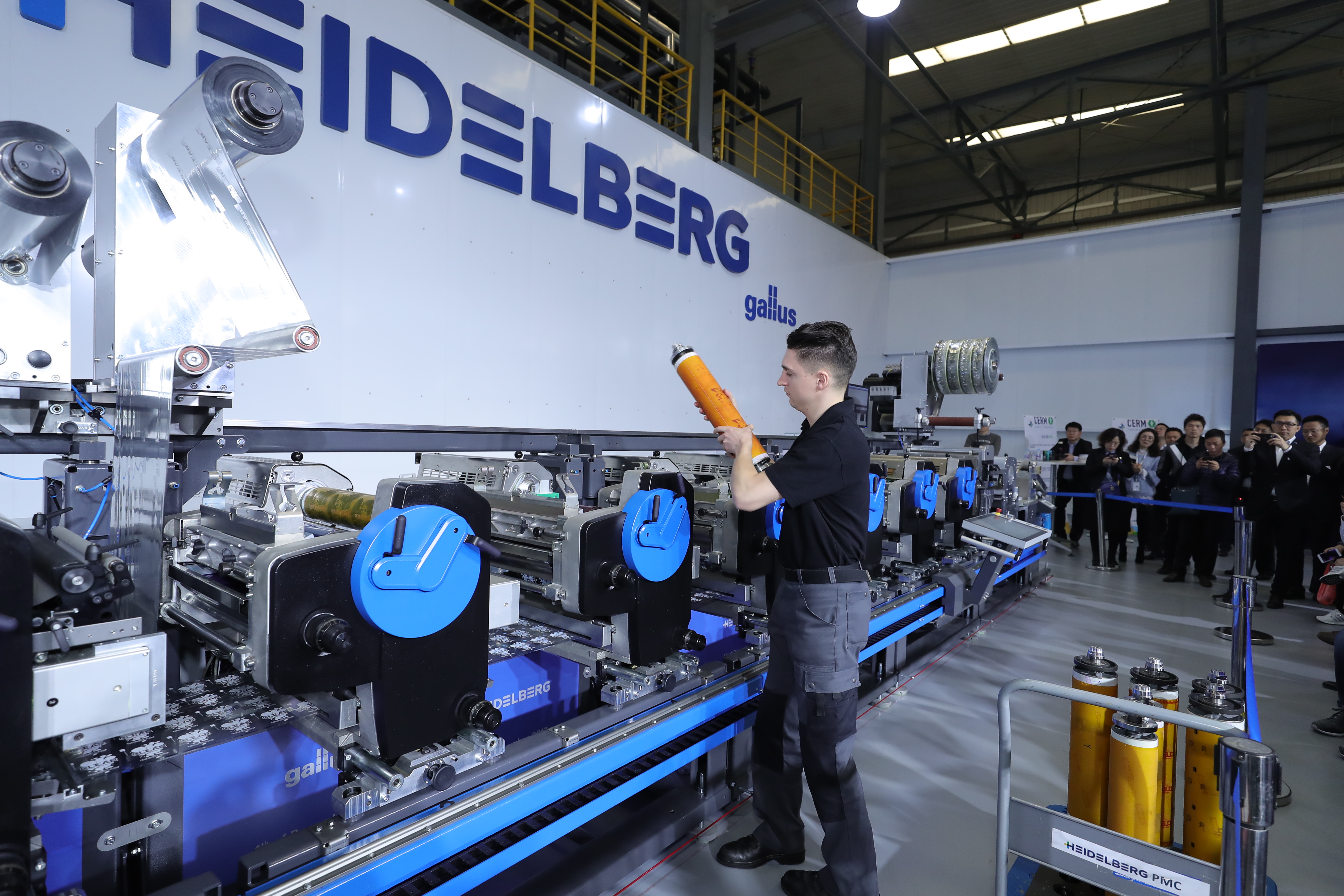 How many times are you welcomed with a cup of either a south Indian filter Kaapi, tea or an array of soft drinks when entering a spanking office of those mighty IT complexes? Replace that moment with, entering into a 55000 square feet printing facility to be greeted by the Managing Director himself and surprising you with a refreshing can of Badam (almond) Milk. At Kamsri, such small and big delights are commonplace and one is bound to feel the air of difference and excellence.

When Suresh Srinivasan, Managing Director of Kamsri, migrated to Bangalore in 1992, all he had was an experience that he had gathered from his first venture – Srikam print pack – a “flexo printed poly bag manufacturing” unit which he started in Chennai, and the passion to excel in the flurry of a fragmented printing industry. This, coupled with a post-graduate diploma in Plastic-Technology gave Suresh the much needed impetus to extend his entrepreneurship goals in printing across states. And thus a second unit – Kamsri, was established in Bangalore, where he had earlier graduated as a Mechanical Engineer. Kamsri made a humble beginning in 1995 with a used two-colour offset press, a progressive e-system team and an adequate understanding of market dynamics.

Around then, business volumes were moving up and the stress on quality and delivery was increasing. The quest to comprehensively meet a customer’s requirement took precedence, and an additional used Heidelberg GTO two-colour press had come to aid; however prepress continued to be outsourced.

The joining of Mrs. Lakshmi Suresh, Finance Director, Kamsri, in 2005 proved to be a turning point for Kamsri. A Chartered Accountant by profession, Lakshmi took an enormous task of giving Kamsri the much needed marketing exposure and reassessed their positioning. With some research, she foresaw the opportunities that can be tapped by venturing into the apparel industry. Her estimates turned accurate and a new stream of customer base was discovered, which shot the sales up.

In 2007, history repeated itself with Mr. R. Viswanaathan, Executive Director, Kamsri joining in and like Lakshmi, became one of their greatest assets. In no time, Viswanaathan became the backbone of the process, systems and the team management at Kamsri and the wheel of Quality-Standards was put into motion.

After having followed the cycle of reading the market, offering the required and consistently achieving excellence, the changing times didn’t go unnoticed by Suresh. As he puts it, “We needed to move on from our approach of delivering just what is required to the approach of building our capacity and adding real value to the client, which comes through quality output and solutions that matter to our clients the most.”

That explains the recent addition at Kamsri – the Heidelberg Speedmaster XL 75 six-colour press. “After a thorough market survey, feedback from printers, and the knowledge exchange at Heidelberg Print Media Academy, Chennai, it was clear that the value-add offered to any client, irrespective of scale or industry, will be the key driver for Kamsri’s growth. A vast experience of almost two decades gave us the confidence to customize and deal with each client as a unique one,” shares Viswanaathan.

“Besides meeting quality, productivity and value-add requirements, there is a very high brand value that Heidelberg scores, and it helps us to position ourselves better and escalate our business. We walk taller wearing a Heidelberg Badge,” adds Suresh.

The highly innovative technology of Heidelberg Speedmaster XL 75 comes equipped with production speed of up to 15000 sheets per hour and is equipped with touch screen operating panels (at feeder and delivery). The Prinect Press Center and Intellistart process-oriented operator guidance system help to achieve uninterrupted production even across a wide variety of substrates ranging from 0.03 mm to 0.80 mm (0.0012 inch t0 0.0315 inch).

The Speedmaster XL 75 has program controlled inking roller and blanket wash-up device which reduce the make-ready times. Shortest make-ready times as well as consistent high production speeds are a given with Speedmaster which in turn ensure the decisive competitive edges in technology and productivity.

Heidelberg Speedmaster XL 75 at Kamsri has become one of the main attractions, for both, internal and external stakeholders. Also, Kamsri’s press operators know how to use the press most efficiently. Their operators have also been a part of Heidelberg’s “Operator Development Program” – a fully sponsored one-month training program by Heidelberg India, which aims at enhancing the skills of press operators so that they can utilize the technology to its best and reap all the benefits.

As it now stands, Kamsri has an in-house prepress set-up with a designing team, state-of-the-art Mac and Windows workstations and a CtP device. In the press division, they have a five-colour press (28×40 format) with a guillotine, other than the six-colour Heidelberg Speedmaster XL 75. Their postpress facility comes with automatic die-cutters, folder-gluers along with lamination and slant bed punching machines.

Lakshmi describes Suresh as “a hardcore entrepreneur by nature” while also nostalgically recalling Suresh publishing his own notes during his college days. Behind Suresh’s subtleness, is a dynamic identity which becomes evident from his work and all that he builds.

In order to further breathe professionalism into his ventures, Suresh completed an MBA from Indian School of Business (ISB), Hyderabad in 2012. His zeal for excelling in business and to further hone his leadership abilities led him to ISB. He rightly believes that this education will prove to be a differentiator for Kamsri.

Having spent two decades in the skill based industry now and with a robust 200 member team, Kamsri has come a long way and takes pride in its cohesive team which stood by it, thick and thin, right from the inception. Organizations see many ups and downs and Kamsri has had its share too but has survived and excelled, nevertheless.

With a soothing highbrow sense of humor and a never ending urge to learn and grasp, Suresh dreams of building a promising yet an understated enterprise, alongside his ‘Home and Financial Director’ – Lakshmi, his ‘cohort’ – Viswanaathan and his ‘technology partner’- Heidelberg.

Kamsri moves on with a single goal – to provide quality and value to its customers. “Our vision is to optimize our current capacity”, echoes the entire Kamsri team. With an expert team, a streamlined and tested process, an ISO 9001:2008 certification and their recent pride possession of Heidelberg Speedmaster XL 75, Kamsri has already taken a leap of faith and is strongly headed towards its vision. The company also has a stable ERP set up and is equipped to move into the space that is advancing into digitalization and automation. Clear in vision and action, Kamsri assures a magic touch to whatever it lays its hands on – A touch of Quality.

Are you interested in exploring the growth story of your printing business, the way Kamsri did?  Contact Heidelberg India right now!

How many times are you welcomed with a cup of either a south Indian filter Kaapi, tea or an array of soft drinks when entering a spanking office of those mighty IT complexes? Replace that moment with, entering into a 55000 square feet printing facility to be greeted by the Managing Director himself and surprising […]

How many times are you welcomed with a cup of either a south Indian filter Kaapi, tea or an array of soft drinks when entering a spanking office of those mighty IT complexes? Replace that moment with, entering into a 55000 square feet printing facility to be greeted by the Managing Director himself and surprising […]