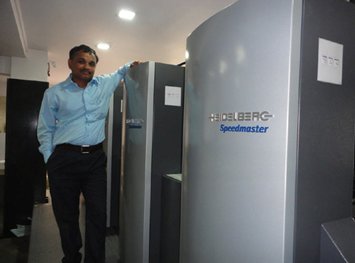 Coming from a family of farmers, Dyaneshwar Patil in his early days was greatly influenced by the variety of mesmerizing colours and designs that nature had to offer. An impressionable mind then, he had already designed his future.

“My entire family was into farming, but I wanted to do something different. I liked challenges. Nature greatly inspired me with its myriad colours and designs and I had a deep urge to learn new things. I saw the possibility of manifesting my ideas in printing and I grew increasingly inclined towards it”, admits Dyaneshwar Patil, candidly.

In 1998, Dyaneshwar graduated in Printing Technology from Pune’s ‘Vidyarthi Griha’s Maharashtra Institute of Printing Technology’ and it was no looking back thereafter. Just two years after his graduation, he single-handedly started Shree Someshwar Printers in Nasik and also managed to create a client base.

Even though obstacles were galore in the initial phases, it was Dyaneshwar’s determination that helped the business sail through the rough waters. In the beginning he ventured into commercial printing and bookmaking, with his next target being packaging.

Shree Someshwar Printers’ success story starts with Dyaneshwar who is at the helm and is ably supported by three key members; Deepak Dattatraya – Factory Manager, Santosh Tidke – Marketing Manager and Ganesh Gadge – Production in charge, and not to forget his army of fifteen dedicated and skilled workforce.

The precursor to the real transformation of Shree Someshwar Printers came in 2003, when Dyaneshwar first came to know about Heidelberg. “I was really impressed by what I had read about Heidelberg, and my enquiries in the market received positive feedbacks. I then decided to adopt Heidelberg technology”, says Dyaneshwar.

This decision was firmed after witnessing live demos of Heidelberg presses at an Indian exhibition called PAMEX, in Nov 2011. On probing about his experience, he shared, “I was floored by the way Heidelberg’s presses performed. Whatever I had heard about Heidelberg turned out to be absolutely true. It was incredible and deep down I knew that my dream would get further impetus with Heidelberg. I there and then decided that I would go with Heidelberg’s Speedmaster SM 74 press. And in late 2012, the press was installed”.

The Speedmaster SM 74 – a great press with great value for money is meant for medium-format applications. With a production speed up to 15000 sheets per hour, it can handle wide range of substrates from light weight paper (0.03 mm) to (0.60 mm) board. Also, the Prinect Press Center with Intellistart process-oriented operator guidance system provides user-friendly and ergonomic operations.

Lifetime Commitment with Heidelberg
“The benefits that Heidelberg SM 74 offers are multifold and quite impressive. The jobs I used to do on two presses earlier are now handled by SM 74 alone and in addition, it also caters to extra jobs. This speaks volumes about the productivity of Heidelberg presses and helps printers like me to save on manpower, time and money. Even the power consumption has been low and the wastage is reduced. Thequality it yields is the best we have churned so far and the reliability of the press is immense. Henceforth, I will be using only Heidelberg’s equipment, whatever may be the application. It’s a lifetime commitment with Heidelberg” admits Dyaneshwar.

Currently Shree Someshwar Printers caters to Education, Pharma, Agriculture and Automobile industries. With a clear focus on the future growth, Dyaneshwar forthrightly mentions, “I am looking forward to having one more setup, and of course only with Heidelberg. It would be a one-stop-printing providing a variety of printing solutions”.

Dyaneshwar Patil of Someshwar Printers with the brand new Heidelberg Speedmaster SM 74 four-colour press
At the moment their post-press division hosts cutting machines, one punching machine, one UV coating machine and one Stahlfolder folding machine, while the pre-press is outsourced. Someshwar is known for their timely services, quality management and well-planned production.

Shree Someshwar Printers is also certified as an ISO 9001:2008 company. Dyaneshwar emphasizes, “Without Heidelberg, the ISO certification wouldn’t have been possible. They have been very supportive right from initial discussions, installation to post-installation. The training they impart to our operators was extremely useful. Similarly, I give credit to all my employees as they too have given their 100%. I believe that for a quality output, besides having quality machinery, one also needs to have a quality workforce. I have ensured my employees’ welfare at all times from helping them financially to giving them moral support whenever the need be”.

According to Dyaneshwar, buying the Heidelberg Speedmaster SM 74 is his biggest achievement. “After I installed the Heidelberg Speedmaster SM 74, we did some commercial printing jobs for a New Delhi based client that was earlier done in Delhi itself. Not only was the job well appreciated and complimented by our client, but they decided to do all their jobs at Someshwar in future. Today we are the most sought after printer in the whole of Nasik, setting new benchmarks. Thanks to our lifelong printing partner – Heidelberg and our team at Someshwar”, sums Dyaneshwar.

Coming from a family of farmers, Dyaneshwar Patil in his early days was greatly influenced by the variety of mesmerizing colours and designs that nature had to offer. An impressionable mind then, he had already designed his future. “My entire family was into farming, but I wanted to do something different. I liked challenges. Nature […]

Coming from a family of farmers, Dyaneshwar Patil in his early days was greatly influenced by the variety of mesmerizing colours and designs that nature had to offer. An impressionable mind then, he had already designed his future. “My entire family was into farming, but I wanted to do something different. I liked challenges. Nature […]